by
Jp Koning
My articles My siteMy booksMy videos
Follow on:Twitter
Summary:
[[My first article with Breakermag was published in September 2018. Alas, Breakermag closed its doors in 2019. The website remained up for a while but it seems to have recently been decommissioned, so I'm salvaging this story from the abyss of disappearing internet content. I think it succinctly captures a point I make over and over. When we go to a casino, the verb we use to describe this activity is 'playing,' not 'investing.' Likewise, we should be using the word 'play' when we talk about what we do with crypto. Drill into what crypto is about and it's mostly (not always) gambling games—yes, novel games, but gambling nonetheless. Getting the semantics right is important. Owning crypto is fun and entertaining (and potentially problematic). So is going to the casino. But players

Jp Koning writes Should central bankers be afraid of crypto?

Tether vs the New York stablecoins

A tax on proof-of-work

Should central bankers be afraid of crypto? 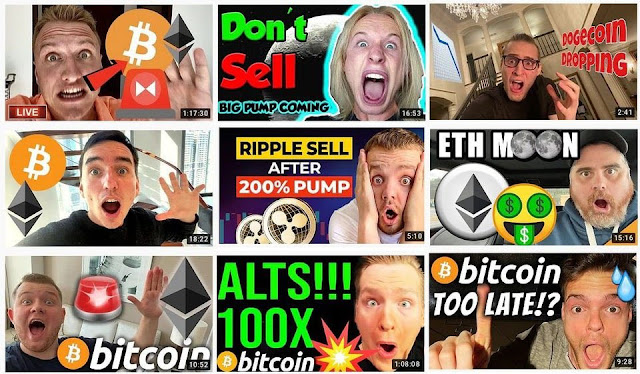 [[My first article with Breakermag was published in September 2018. Alas, Breakermag closed its doors in 2019. The website remained up for a while but it seems to have recently been decommissioned, so I'm salvaging this story from the abyss of disappearing internet content. I think it succinctly captures a point I make over and over. When we go to a casino, the verb we use to describe this activity is 'playing,' not 'investing.' Likewise, we should be using the word 'play' when we talk about what we do with crypto. Drill into what crypto is about and it's mostly (not always) gambling games—yes, novel games, but gambling nonetheless. Getting the semantics right is important. Owning crypto is fun and entertaining (and potentially problematic). So is going to the casino. But players shouldn't be fooled into thinking that they are engaging in a productive and socially beneficial enterprise.]]

No one invests in the lottery; they play it. Rather than investing in bitcoin, let’s play bitcoin.

On December 8, 2017, just a few days after bitcoin crossed the $10,000 mark for the first time, Coinbase CEO Brian Armstrong published a blog post asking customers to “invest responsibly.” A week after Armstrong’s appeal, the price of bitcoin hit $19,801, paused, and then proceeded on what has been nerve-wracking decline ever since.

In hindsight, Armstrong’s “invest responsibly” post seems timely. Any novice would have saved themselves much money and stress if they’d taken his advice to be careful and had either reduced the amount they purchased or stayed entirely out of the market. These days, Reddit is littered with stories of disillusioned buyers who diverted large amounts of their savings into bitcoin or some other cryptocurrency near the December 2017 highs. One story, recounted in the New York Times, describes a 45-year-old Korean teacher who borrowed money to buy $90,000 worth of cryptocurrencies, only to lose most of it.

I have a problem with the words that Armstrong chose for his blog post. Most people do not invest in bitcoin. They play bitcoin. Using the correct word to describe the relationship that the great majority have with their bitcoins would be a powerful way to ensure that new buyers of bitcoin do not get the wrong expectations about what they are getting into.

Bitcoin lies in the same economic category as financial games like poker, roulette, and the lottery. These are all zero-sum games. The property binding all zero-sum games together is that the amount of resources contributed to the pot is precisely equal to the amount that is paid out. Because nothing additional is created in a zero-sum game, for every player who wins something from the pot, there must be a loser.

Compare this to win-win financial opportunities like stocks or bonds. In the case of a stock, each shareholder’s contribution is used to support the underlying firm’s deployment of capital. This cocktail of machinery, labor, and intellectual property is combined to create products, the sale of which generates a return. Put differently, as long as the firm’s managers deploy the money in the pot wisely, the firm can throw off more cash to shareholders than the sum originally put into the pot.

This generative capacity does not exist with zero-sum games. Take poker, for example. If five players have all bought into a poker game for $1,000, there is no way that the winner of the game can get more than $5,000. A zero-sum game cannot generate more than the sum of its parts. Likewise with bitcoin. The only way that a buyer at today’s price of $6,442 can avoid being a loser is if someone else is willing to buy that bitcoin at a higher price, say $6,995. Unlike a shareholder in a firm, bitcoin holders have not bought into a value-creating business. Their only escape is the next person in line.

What makes bitcoin different from other zero-sum games is the method for splitting the pot. Poker awards pots to whoever ends up with the best hand of cards. In the case of the lottery, the pot goes to the lucky number. Bitcoin divides pots on the basis of entrance order. Early birds are rewarded by late-comers.

This first-in-line redistribution mechanism is by no means bitcoin’s only unique feature. Rather than being hosted at a Las Vegas casino, bitcoin is a decentralized online game. This means that there is no way for the authorities to march into the casino and shut the game down. Nor can the system operator prevent people from participating. Whereas casino operators regularly bar people from entering, bitcoin is maintained by a network of independent validators that cannot easily censor users from making bitcoin wagers. Finally, bitcoin is automated by open source code, unlike say a human croupier who can make mistakes in redistributing a roulette pot. This code is fully auditable. Everyone can see what the rules are and check that they are being abided by. Contrast this with a lottery which reveals nothing of its inner workings.

In suggesting that bitcoin should be labelled a game rather than an investment, I don’t mean to belittle it. Financial games provide value. A casino employs not only croupiers but also managers, marketers, cooks, cleaning staff, programmers, security guards, and more. These jobs help the economy. People fly to Vegas for a reason. In moderation, financial games are fun, sort of like how going to a horror movie provides thrills.

Likewise, bitcoin’s price contortions can be entertaining. Combine this with the constant soap opera generated by the personalities involved in the space, and you’ve got a form of recreation that competes head on with Netflix, League of Legends, or the NFL. Bitcoin and its many ancillary services—exchanges, payments processors, and wallet providers—create jobs for programmers, marketers, lawyers, and economists.

If financial games were illegal, then the provision of lotteries, poker, and other forms of betting would shift to the underground economy. Not only would the quality of the product decline, but violence could rise as criminal organizations fight to control their gaming turf. Bringing these activities into the light—in bitcoin’s case by implementing an open and transparent online version—makes society safer.

And of course, there are times when bitcoin serves as more than just a financial game. In 2011, for instance, Wikileaks relied on bitcoin to maintain its connection to donors after being cut off from the banking system. This payments function was why bitcoin was originally created, but it has taken a distant back-seat to the technology’s dominant role as a decentralized financial game. Indeed, what makes bitcoin such a thrilling game—its rollercoaster peaks and troughs—is the very feature that militates against its usage as a medium of exchange. People don’t want volatile money, they want stable money.

This gets me back to Brian Armstrong’s admonition to Coinbase’s customers to invest responsibly. His warning label just doesn’t cut it. No one invests in a zero-sum game, they play it. A casino owner daring to suggest that playing roulette is akin to investing would be justifiably pilloried for engaging in purposeful deception or, at best, sloppy word usage. Same with a lottery operator who advertises Powerball tickets as an investment. Likewise, people buying bitcoins should not be encouraged to believe that they are engaging in the age-old art of investment appraisal. They are playing a zero-sum game. The word “investment” should be reserved for the act of allocating capital to win-win games like shares in private businesses, publicly traded stocks, and bonds.

I am not singling out Armstrong. The idea that bitcoin is an investment plagues the entire sector. Chris Burniske, a well-known bitcoin trader with more than 100,000 Twitter followers, has entitled his book (written with Jack Tatar) Cryptoassets — the innovative investor’s guide to bitcoin and beyond. Or take the recent CNBC interview of Meltem Demirors, CoinShares chief strategy officer, in which she made the curious analogy between bitcoin—a zero-sum game—to Amazon, a security that falls within the realm of investment analysis. I am also reminded of Litecoin creator Charlie Lee’s own “invest responsibly” moment on Twitter last December, even as he was dumping his holdings on novices at prices that would eventually prove to be near their peak.

The majority of newcomers are attracted to the crypto scene not for ideological reasons, but by the scent of big winnings. Many are betting a big part of their wealth on bitcoin or other cryptocurrencies. And no wonder. If a 20-year old with life savings of $1,000 can turn that amount into $10,000 in just a few weeks, they will have advanced their financial status far faster than by toiling away at a job, or putting it in a savings account. The dark side is that this $1,000 in savings can just as easily be destroyed by bitcoin’s inherent volatility. Dropping the word “investment” and replacing it with “game” would be a more accurate description of the activity in which bitcoin owners are participating. The flocks of new entrants might get a better inkling what kind of door they are entering. Maybe they will avoid doing serious damage to their futures.

With a game, nothing is assured. Games are something to dabble in, not vessels for one’s retirement savings. A problem gambler, someone who continuously bets their savings on zero-sum financial games despite the financial harm being inflicted on themselves and their family, doesn’t need the affirmation that the word “investing” brings to their activities. Instead of asking Coinbase users to “invest responsibly,” Armstrong should have used a version of the disclaimer that most American lotteries use, including Powerball: “Play Responsibly. Remember, it’s just a game.”

Working in the bowels of the finance industry. Blogging about monetary phenomena is my side gig.
My articlesMy siteMy books
Follow on:Twitter
Previous Tornado.cash and money laundering
Next Is money a ponzi?

(Research Paper) A Network Analysis of the JGB Repo Market