by
New York Fed
My articles My siteMy booksAbout me
Follow on:TwitterFacebook
Summary:
Kristian Blickle, Anna Kovner, and Shivram Viswanathan An understanding of the developments in financial intermediation is critical to the efforts of the New York Fed to promote financial stability and economic growth. In line with this mission, the Bank recently hosted the fourteenth annual Federal Reserve Bank of New York-New York University Stern School of Business Conference on Financial Intermediation. As in years past, the conference attracted a large number of academics and policymakers from around the world who engaged in discussions of their most recent research. In this post, we discuss highlights of the conference. Funding and Liquidity Runs on bank deposits have historically been a symptom of banking panics. In the first session, Daniel Paravisini

The Value of Opacity in a Banking Crisis 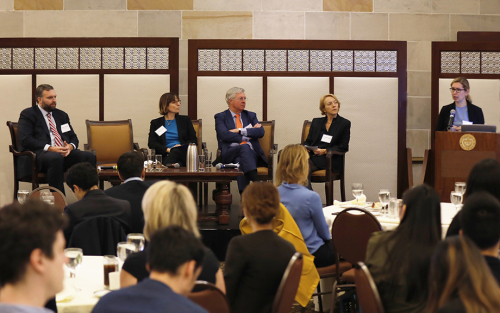 An understanding of the developments in financial intermediation is critical to the efforts of the New York Fed to promote financial stability and economic growth. In line with this mission, the Bank recently hosted the fourteenth annual Federal Reserve Bank of New York-New York University Stern School of Business Conference on Financial Intermediation. As in years past, the conference attracted a large number of academics and policymakers from around the world who engaged in discussions of their most recent research. In this post, we discuss highlights of the conference.

Funding and Liquidity
Runs on bank deposits have historically been a symptom of banking panics. In the first session, Daniel Paravisini presented work with coauthors Nikolaos Artavanis, Claudia Robles-Garcia, Amit Seru, and Margarita Tsoutsora expanding on our understanding of depositor behavior in bank runs using microdata on time deposits at a bank in Greece. By exploiting uncertainty around a Greek election, their study finds a strong increase in the probability of early withdrawals. They estimate that two-thirds of this increase is directly attributable to the fundamental risk of the bank, while the remaining third is strategic and related to concerns about other depositor withdrawals.

The second paper in this session evaluated the impact of government loan guarantees on small business lending. Constantine Yannelis and his coauthors Natalie Bachas and Olivia Kim investigate the effect of loan guarantees on the volume of extended credit by examining the discontinuity in the generosity of the guarantee of the Small Business Administration 7(a) loan program. The authors’ findings seem to suggest that loan amounts are highly responsive to the guarantee rate and that government guarantees can encourage the provision of credit.

In the third paper of the session, Bige Kahraman, along with her coauthors Felix Suntheim, Marcin Kacperczyk, and Dunghoon Jin, showed that mutual funds use dual pricing or swing pricing (that adjust funds’ net asset values to pass on trading costs to transacting shareholders) as a liquidity-risk management tool. The authors claim that funds that implemented alternative pricing rules in the United Kingdom reduced outflows in times of financial stress. However, they note that the same funds have difficulty attracting investor capital outside of these periods owing to increased tracking error.

The Corporate Credit Cycle
A diverse panel of experts shared a variety of perspectives on corporate credit markets and credit cycles during a discussion moderated by Anna Kovner, the New York Fed Research Group’s Policy Leader for Financial Stability. Panelists spoke on investors’ views of the corporate financing market. In particular, they discussed the increasing divergence in performance between BBB- and CCC-rated debt, with lower quality credit underperforming on a risk-adjusted basis. Some panelists also discussed the leveraged financing market from the perspective of credit ratings and credit quality, noting that ratings distributions of late have possibly been reflective of weaker credit quality. Other issues addressed included the implications of weak or nonexistent loan covenants and the securitization of corporate loans on financial fragility and the resilience of loan CLOs. Panelists argued that loan CLOs have historically been resilient to downturns, and have increasingly strong capital structures as well as locked-up capital.

Bank Financing and Consumer Protection
The next session began with theoretical work. Jason Roderick Donaldson, in collaboration with Giorgia Piacentino, shared work that proposes a model to explain the presence of offsetting gross interbank lending claims. The model shows that, in the presence of a liquidity shock and an imperfect ability for assets to be liquidated or pledged as collateral (such as for long-term, illiquid instruments), outstanding gross debts can be sold to meet short-term funding requirements. However, the results also imply that this pattern could lead to cascading defaults in the event of a crisis, when all banks experience liquidity or solvency shocks.

Turning to consumer loans, Mark Jansen presented his work with Jennifer Brown studying the impact of usury and wage garnishment laws on auto loans. The authors claim that automobile dealers, in response to state usury laws, adjust the principal amount when interest-rate limits bind, so that comparable borrowers make the same monthly payments. They further suggest that loans originated in states that prohibit the collection of wages post-default are more likely to default, and are ultimately more costly to solvent borrowers.

Returning to the topic of bank funding, Kairong Xiao shared results from his paper with Suresh Sundaresan on the unintended consequences of liquidity regulation. Their research suggests that a large share of the increased liquidity used to satisfy the Liquidity Coverage Ratio (LCR) requirement for banks comes from Federal Home Loan Banks (FHLBs). They argued that this dependence on public liquidity is tenuous and could disappear in times of financial distress if FHLBs cannot access funding, possibly counteracting some objectives of the LCR regulation.

New Work by New Scholars
The last session featured shorter “lightning” presentations that included three papers by researchers who are within three years of completing their PhDs.

Alexander Bechtel presented his work with Jens Eisenschmidt and Angelo Ranaldo. They look at the heterogeneous effects of quantitative easing (QE) on the availability of safe assets (in the European Union). They find that every 1 billion EUR purchased as part of the European Central Bank’s Public Sector Purchase Programme (PSPP) led to a transfer of 750 million EUR in safe assets from the nonbank sector to the banking sector. Thus, the non-neutrality of safe asset allocation due to QE has important implications for the transmission of monetary policy and financial stability.

Emil Verner and his coauthors Matthew Baron and Wei Xiong compiled a new data set of bank equity returns for forty-six countries from 1870 to 2016. Using this data, they identify periods with falls in bank stock prices that were not previously identified as financial crises by the narrative approach. They find that, although panics amplify adverse effects, bank equity declines on their own also lead to substantial macroeconomic and credit contractions.

The last presentation linked questions in financial intermediation directly to the real economy by proposing zombie credit as an explanation for low inflation in Europe. Defined as cheap credit extended to firms that otherwise may have failed, zombie credit may be keeping more firms from default, leading to excessive productive capacity and a downward pressure on prices. Matteo Crosignani and his coauthors Viral Acharya, Tim Eisert, and Christian Eufinger document this phenomenon using granular firm- and product-level data from over one million firms in eleven EU countries.

Kristian Blickle is an economist in the Federal Reserve Bank of New York’s Research and Statistics Group.

Anna Kovner is a vice president in the Bank’s Research and Statistics Group.

Shivram Viswanathan is a senior research analyst in the Bank’s Research and Statistics Group.

The Federal Reserve Bank of New York was incorporated in May 1914 and opened for business in November later that year. To commemorate the New York Fed’s centennial, take a look at the people and events that helped shape our history.
My articlesMy siteMy booksAbout me
Follow on:TwitterFacebook
Previous Firm-Level Shocks and GDP Growth: The Case of Boeing’s 737 MAX Production Pause
Next Understanding Heterogeneous Agent New Keynesian Models: Insights from a PRANK

History of Frankfurt Stock exchange and linkages to monetary system