by
New York Fed
My articles My siteMy booksAbout me
Follow on:TwitterFacebook
Summary:
Rajashri Chakrabarti, Sebastian Heise, Davide Melcangi, Maxim Pinkovskiy, and Giorgio Topa The spread of COVID-19 in the United States has had a profound impact on economic activity. Beginning in March, most states imposed severe restrictions on households and businesses to slow the spread of the virus. This was followed by a gradual loosening of restrictions (“reopening”) starting in April. As the virus has re-emerged, a number of states have taken steps to reverse the reopening of their economies. For example, Texas and Florida closed bars again in June, and Arizona additionally paused operations of gyms and movie theatres. Taken together, these measures raise the question of how closures and reopenings affect consumer spending. In this post, we investigate how much consumer 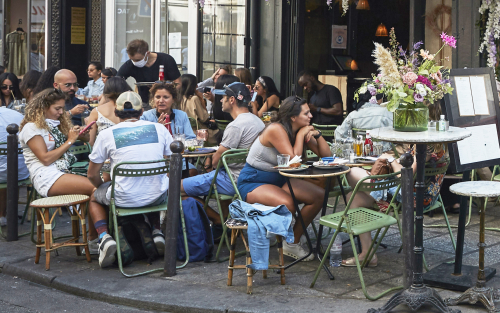 The spread of COVID-19 in the United States has had a profound impact on economic activity. Beginning in March, most states imposed severe restrictions on households and businesses to slow the spread of the virus. This was followed by a gradual loosening of restrictions (“reopening”) starting in April. As the virus has re-emerged, a number of states have taken steps to reverse the reopening of their economies. For example, Texas and Florida closed bars again in June, and Arizona additionally paused operations of gyms and movie theatres. Taken together, these measures raise the question of how closures and reopenings affect consumer spending. In this post, we investigate how much consumer spending increased after the reopenings. It is important to stress that we are not expressing any views on the normative question of whether, when, or how states should loosen or tighten restrictions aimed at controlling the COVID-19 pandemic.

Measuring Consumption by State Using Card Transaction Data
Our analysis relies on detailed county-level debit and credit card transactions data obtained from Verisk Analytics. Verisk collects information on the transactions of around 40 million U.S. households. The data we use cover 90 percent of credit cards and 30 percent of debit cards in the United States and are balanced for the geographic distribution of the U.S. population. In addition, the aggregate trends from Verisk align well with national retail sales numbers. We aggregate the data to the state‑week level and combine it with detailed information on each state’s reopening from the New York Times. To make spending in different states comparable, for each state, we express weekly spending as a fraction of the average spending in January.

We follow an event-study methodology similar to that of our previous post to isolate the causal effect of reopening on spending. First, we control for changes in spending that affected all states equally, such as seasonal factors. Second, we control for each state’s average change in consumer spending since January. Our regression, therefore, accounts for the fact that spending dropped more significantly in some states than in others in the early phase of the pandemic, which may have contributed to a sharper rebound in these states. Finally, we control for lagged spending since spending is persistent: high spending in the previous week usually also implies high spending in the current week. By removing these factors, our analysis isolates the incremental change in states’ average consumer spending at reopening relative to the average weekly change in spending.

Our strategy exploits the fact that not all states reopened at the same time to separate the impact of reopening from a general increase in face-to-face interactions and associated consumption as the number of COVID-19 cases declined. Since we control for lagged spending, our analysis isolates the short-run effect of reopening on spending beyond the persistent component. We note that our analysis cannot speak to longer-term effects of reopenings. In all charts shown in this post, the confidence bands of our point estimates become large with the passage of time, and we cannot reject the eventual unwinding of the estimated effects to zero—which could also indicate convergence of all states after they have reopened.

Reopenings Cause an Increase in Consumer Spending
The chart below shows that reopening increased consumer spending. The blue dots present our point estimates for the change in consumer spending relative to the baseline in each week before and after reopening, while the red lines indicate 95 percent confidence intervals. Our point estimates indicate that reopening increases spending by about 2 percent in week two after the end of the lockdown. Intuitively, this coefficient represents the difference in spending between states that reopened two weeks before and states that had not yet reopened at that point. In results not shown, we find that this effect is statistically significant at the 90 percent level, although not at the 95 percent level. The increase in relative spending is persistent over the weeks that followed. To put our result in perspective, note that earlier work has shown that the 2008 economic stimulus payment increased spending by 1.5-3.8 percent over three months. 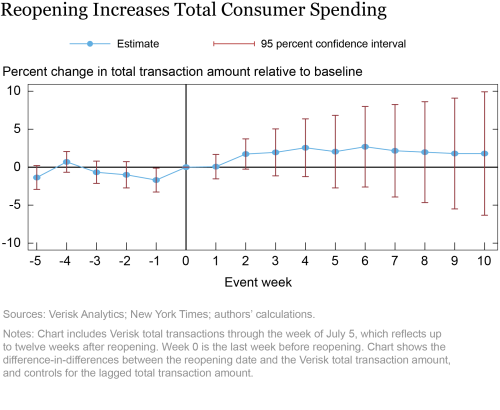 A possible concern with our finding is that spending could already have been rising in reopening states (relative to states that had not reopened) prior to the easing of restrictions, for example because COVID-19 case numbers were already dropping leading up to reopening. In such a case, our results would partially reflect changing behaviors in the reopening states that began before the easing of restrictions. Our estimates show that such concerns are not supported by the data. Spending did not differ significantly between the reopening states and those that had not opened yet in the weeks prior to the end of the lockdown. Moreover, spending clearly shifts and begins to increase from the first week after reopening. This result adds confidence that our analysis isolates a causal effect of reopening on activity.

We next analyze more disaggregated categories of consumer spending. We would expect to find that reopening had a large effect on spending in restaurants and bars: in many states, reopening allowed these establishments to switch from takeout-only to more comprehensive service. Consistent with this intuition, the next chart highlights that reopening indeed had large effects on restaurant spending. Consumer activity increased gradually following reopening in the reopening states compared to states that reopened later and was about 10 percent higher six weeks after reopening than in the weeks before the lifting of restrictions. This effect is strongly statistically significant. Moreover, as before, we find no significant differences in trends prior to the events studied, which corroborates the causal interpretation of our findings. 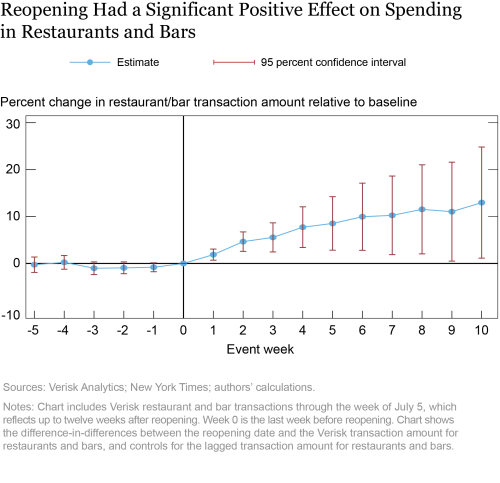 Our findings so far show that the total effect of reopening on consumer spending is smaller than the effect of reopening on restaurant spending. This is potentially due to a substitution effect. We find that reopening caused a significant decline in grocery spending (not reported here), consistent with consumers switching from meals at home to restaurant meals as the economy reopened. Nevertheless, the net effect on spending is still positive, as the chart above shows. This outcome reflects the fact that reopenings not only caused an increase in consumer spending in the hospitality sector but also in some other industries. Averaging over all industries, the net effect is positive. To illustrate this point, the chart below highlights that spending in the healthcare sector rose significantly following reopening. Healthcare spending is about 10 percent higher three weeks after reopening than before the loosening of restrictions. 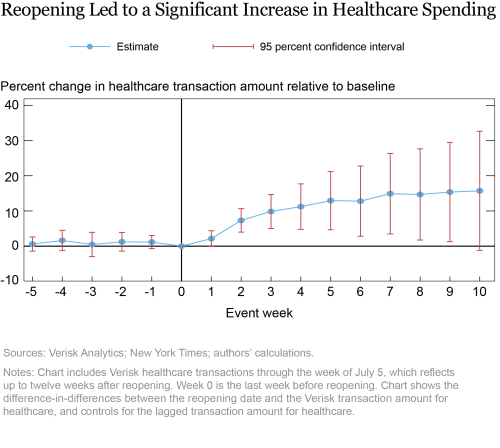 Overall, this post highlights that reopening had a positive effect on consumer activity—although it is important to bear in mind that we focus on short-term effects here. The effect on total consumer spending (as captured by our credit and debit card transaction data) is in the order of 2 percent, with significantly larger effects on spending in some industries—in particular, restaurants and bars and healthcare. Our results suggest that the tightening of restrictions could potentially lead to a reduction in consumer activity, although the actual effects will depend on the precise nature of the restrictions. Our estimates capture the total effect of reopening, which includes the effects arising from changes in consumers’ perception of risk. If consumer behavior changes as more information about the virus transmission becomes available, the effects of a tightening of restrictions could differ.

Sebastian Heise is an economist in the Research and Statistics Group.

The Federal Reserve Bank of New York was incorporated in May 1914 and opened for business in November later that year. To commemorate the New York Fed’s centennial, take a look at the people and events that helped shape our history.
My articlesMy siteMy booksAbout me
Follow on:TwitterFacebook
Previous What’s Up with the Phillips Curve?
Next How Did State Reopenings Affect Small Businesses?